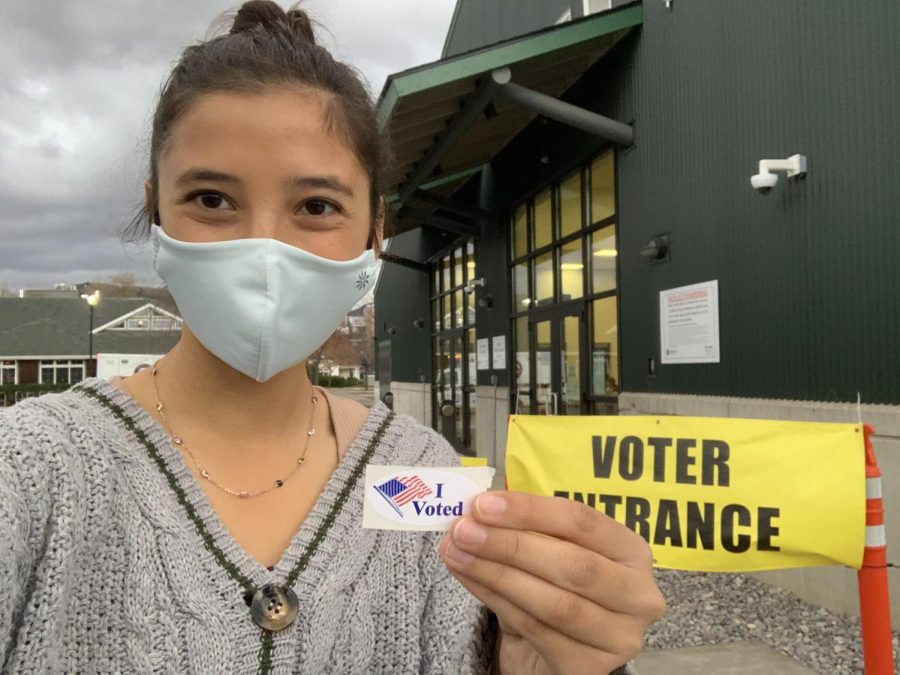 Co-Editor Ali Caudle in front of the Missoula County Elections Office on Wyoming Street after voting on Oct. 29.

The U.S. government utilizes the Internet for hundreds of different government functions and transactions. In the past two decades, everything from filing taxes to managing Social Security benefits has been digitized. Just last week I applied for federal financial aid using the FAFSA (Free Application for Federal Student Aid) website.

So why can’t we register to vote online?

Of those, Oklahoma passed legislation authorizing online registration in April 2015, the state just hasn’t enacted it yet. Additionally, North Dakota is the one state that doesn’t even require voter registration. Voters just need to bring a valid ID and proof of residency to the polls, or can apply online for an absentee ballot.

Regulating elections is a power reserved for the states. In Montana, eligible voters must be a US citizen at least 18 years old, have lived in the state for at least 30 days, and not be serving time in jail. Citizens can register by mail during the regular registration period. Late registration requires citizens to register in person at the County Elections Office.

In addition to these requirements, the most recent legislative session passed several bills (HB176, SB169, HB506) that make it harder for Montanans to vote. They eliminate same-day voter registration, restrict the types of IDs voters may use to register, and prevent ballot distribution to soon-to-be eligible voters.

I consider myself a fairly politically engaged citizen, but I still had a difficult time registering to vote. On Oct. 29, I found myself racing around Missoula, trying to make it to the County Elections Office before they closed.

I turned 18 on Oct. 3, 2021, but because Montana closes regular voter registration 30 days prior to the election, it was too late for me to register by mail. I wanted to vote in the municipal general election on Nov. 2, and in order to do so I would have to register in person.

The Missoula County Elections Office, located at 140 N Russell St, is open 9 a.m. to 5 p.m. Monday through Friday. While that may be normal business hours, anyone who works normal business hours, or is in school, will find it difficult to make it there on time. Between school, sports and extracurricular activities, I went almost all of October without a chance to register in person.

The office finally expanded their hours to 8 a.m. to 6 p.m. the week before the election. I registered to vote at 5:45 p.m. on Oct. 29. It was one of the last possible days since registration now closes at noon the day before the election: this year, that was Nov. 1.

Prior to the election, Hellgate’s AP Government class spent some time talking in small groups about barriers to voting. For youth like us who want to vote, there’s two main things stopping us: we don’t know how and we feel intimidated by the process.

Online voter registration is one possible solution. It makes the process more convenient and accessible, and allows voters to register in a format young Americans are much more comfortable with. Youth ages 18-25 are the least likely to be registered to vote and have some of the lowest rates of voter turnout; reaching these eligible voters virtually is the key to converting them from passive to active actors in our democracy.

That’s similar to the nationwide numbers estimated by the Pew Research Center in 2014: about 20% of eligible Americans were not registered to vote.

That’s another major benefit of breaking down barriers to voter registration. According to Pew Research Center, white adults are historically the most likely to be registered to vote and turn out to vote, compared to other racial and ethnic groups. Online voter registration would help reduce these inequalities by expanding access to historically disenfranchised minorities.

Additionally, online voter registration helps the government. Online voter registration is arguably more secure than traditional paper forms, and is more efficient. It extends the registration period and lessens reliance on the U.S. Postal Service. As an online tool, it minimizes data entry errors and shortens processing time. States don’t have to pay clerks, so it reduces administrative costs.

Online voter registration also ensures increased accuracy of state voter lists, which can reduce confusion and delays at the polls. It’s useful year-round as a tool for voters to check their status, update their information, and for groups to easily register voters from anywhere with just a mobile device.

Montana has no incentive not to increase access to voting, and this is a proven effective method to do so. Increasing political participation should be a primary goal for Montana, especially if we want our representatives to truly represent Montana’s interests.