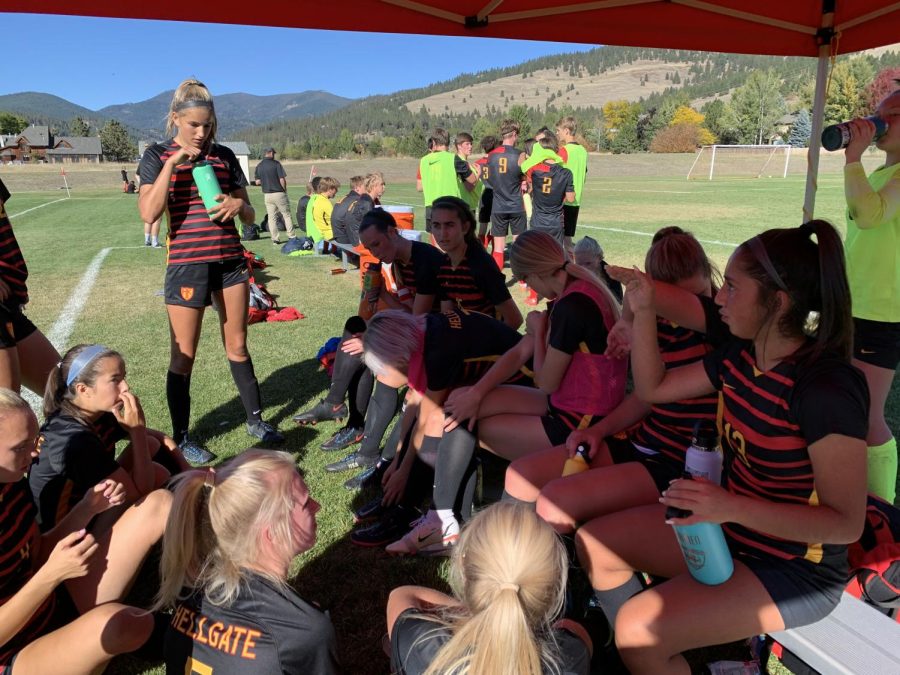 The soccer team huddles on the sideline to talk during halftime of their game against Glacier High School on Oct. 2. Their cleats are laced with teal and purple ribbons in solidarity with the Glacier soccer teams.

Before stepping on the field to play Sentinel on Sept. 24, each player on Hellgate’s girls soccer team threaded a teal and purple ribbon through the laces of their cleats. Hellgate senior and Varsity Captain Clara Tallent passed out the ribbons at practice the day before, as part of a suicide prevention intiative she’s spearheading at Hellgate.

Tallent is a leader on and off the field, also working with Hellgate’s Student Government as Senior Class President. Embracing her leadership roles, she helped launch this suicide prevention intiative to cap off September as Suicide Awareness Month and the first week of October as Mental Health Awareness Week.

According to the Montana Department of Public Health and Human Services (DPHHS), for the past 30 years, Montana has ranked in the top five states for suicide rates in the nation. Suicide is the second leading source of death for young Americans ages 15-24, and in Montana the youth suicide rate for ages 11-17 is 11/100,000. That’s more than double the national rate of 4.56/100,000.

When Tallent read about this crisis, she felt compelled to act. “One night I heard about it and it just really affected me in a way that I didn’t expect,” she said. “I thought since they were both soccer players it should be something incorporated into soccer and you know in school in general.”

“I’m a person who likes to be in control. And this issue especially is something that feels so out of my control. So you know just doing something helps me feel a little bit better about it,” said Tallent.

Once she knew she wanted to take action, she talked to her Senior Class Vice President Lauren Dick. Together, they suggested that Student Government organize something around suicide awareness. With Student Government advisor Melissa Henthorn’s help, they set up several projects.

Student government designed and hung mental health awareness posters around the school, providing resources and information for students. They also organized a schoolwide project where teachers had students write down a response to ‘What keeps you going?’ on a notecard. Those cards were compiled on large posters and hung in the commons.

Tallent and Dick also brought the issue up with their soccer coaches, Natalie Hiller-Claridge, Rachel Eull and Crystal Herzog. Tallent wanted the team to do something ahead of their upcoming games against Flathead High School and Glacier High School – the two KPS high schools in the middle of the crisis.

“It stemmed from what’s happening in the Flathead Valley right now with some of their teams, the teenage suicide that’s happening up there,” said assistant coach Eull. “Clara said she did a deep dive of some of their accounts and it just seemed to resonate with her, but also I think it kind of scared her, you know. And so Natalie and I started talking about it more… We want to address it because it’s happening in our state, but it’s also something that I think people deal with in high school.”

The coaches fully supported Tallent’s idea and agreed to purchase the ribbons for the team to wear. They also took the opportunity to have a conversation with the whole program about suicide and mental health.

“I would hate for one of our players to be going through these feelings and thoughts and us being completely unaware of it,” said Eull. “I want to have these conversations, I want to be the kind of coach – and I know it’s the same with Natalie and Crystal – we want to be the types of coaches that we’re not just here for the soccer. We’re here because we want to be positive role models, we want to be that person that if they have no one else to talk to they can come to us and they feel comfortable talking to us about that.”

“It’s happening all around us and it’s just one of those things where it can be stopped with as little as a check in, a conversation with somebody, you know,” she added. “We want the team and beyond to know that we have the power to be there for each other and to open those conversations and check in with each other. I think that’s part of what being a team is too, is being there for each other.”

These are difficult conversations to have, but they’re necessary. “Asking about suicidal thoughts or feelings won’t push someone into doing something self-destructive. In fact, offering an opportunity to talk about feelings may reduce the risk of acting on suicidal feelings,” said a guide from the DPHHS.

Tallent wants this initiative to have a real impact, and she hopes that Hellgate leans in to having these conversations. “I think that they should take this project seriously, you know, that’s the biggest thing. When we talk in student government, we worry about students not, you know, caring about this issue,” she said.

Most importantly, she hopes this initiative encourages students who are struggling to reach out for help. “Just make sure that if you are ever struggling, make sure you are reaching out and telling someone. That’s really going to make the difference, is letting someone else know and finding help. That will hopefully make it a little easier,” said Tallent.

Hellgate has support systems in place – if you’re in need, reach out to a teacher, counselor, or the school psychologist for help. Additional resources for schools can be found in Montana’s Crisis Action School Toolkit on Suicide (CAST-S). If you or someone you know is dealing with an emotional crisis or suicidal thoughts, dial 1-800-273-TALK (8255). You can also text “HELLO” to 741741 to reach the Crisis Text Line.