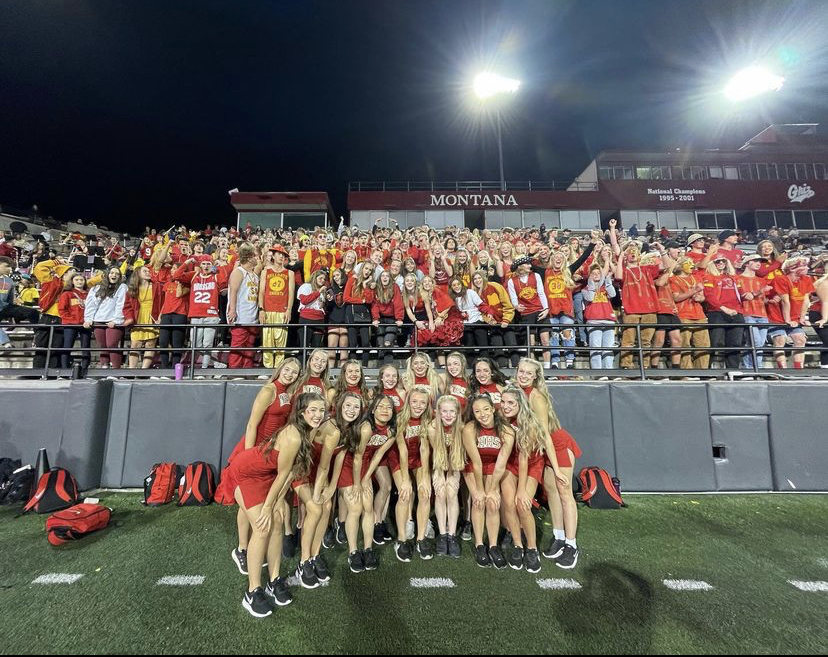 The varsity dance team posing in front of the student section at the Homecoming game. Photo courtesy of Annika Charlson.

Hellgate Dance is back and has become a no-cut program. After many people came to tryouts on May 28 and 29, many cuts had to be made to fill the set number of members allowed on the team and not exceed that number. In the end, Coach Annika Charlson decided to make a new dance program with no cuts.

When the Hellgate Dance Team first started at Hellgate, there were only a few members on the team, about five people. The team has grown each year. “Now, there is such a high interest from Hellgate students to be a part of the dance community within the school, we have expanded from just one ‘Hellgate Dance Team’ to now be a multi-team ‘Hellgate Dance Program,’” said Charlson.

Members who have been on the team for a while were asked their opinions of the no-cut program this year. Ward said, “I think the two teams are good because it gives you motivation to improve if you were placed on JV and you can still be part of the dance team. No cut is good because the more the merrier.”

Kurz replied, “I think having it no-cut this year is nice to let everyone have the opportunity. However, it does take away from the honor of actual dancers who made the team. We will see how Anni (Charlson) is able to handle both of us on her own – it seems like a lot of work for her.”

Coach Charlson has the job of coaching two teams while she looks for an assistant coach. Elena Vesovich said, “I think that it’s interesting that we have two teams this year, but sometimes change is good. I don’t think it should be a non-cut sport because we have limited uniforms and resources so it’s not really fair for non-dancers to be a part of the team. Don’t get me wrong I appreciate everyone but no-cut just seems like it will make HHS dance a lot more difficult.”

When asked what they are most looking forward to this year, Charlson said, “I always look forward to having multiple performance opportunities for the dancers. That is my favorite part of every season. I love to watch my students perform and do what they love to do!” She continued, “Specifically for this year, I am also looking forward to bringing back previous performances and traditions, such as our Lil Knights Dance Camp fundraiser, Spirit Wars and traveling to the State Basketball tournament – pandemic willing of course.”

Elena Vesovich, a senior, said, “I’m looking forward to basketball games and being able to perform for student sections. I hope we get to go to state this year.”

“I am looking forward to going to basketball and State and cheering on Hellgate ‘til the very end!” said senior Ana Ward. State basketball is a large event that the spirit teams look forward to each year.

When talking about how this season will be different, Coach Charlson responded, “This season for the Hellgate Dance Program will of course be unique, as it is our inaugural year of the multi-team program. Although, as I move into my third year as head coach of Hellgate Dance, I can reflect on how each year has been unique in and of itself! I guess there isn’t a ‘normal year’ to ever compare to!”

At the end of Charlson’s first year coaching, COVID hit and was a large aspect during her second year as well.

The Hellgate Dance Program had Team Placement day on Sept. 13. The JV and Varsity team rosters were sent out by Sept. 14 and their first practice was Sept. 15. Varsity will perform at the homecoming halftime show on Sept. 17

“Lastly, I’d just like to say how amazed I am by the strong talents of the dancers here at Hellgate. I am proud to be able to work with these students each year and to be able to help grow their skills from season to season,” said Head Coach Annika Charlson. Many can agree that the Hellgate Dance Program has a great season ahead of them.