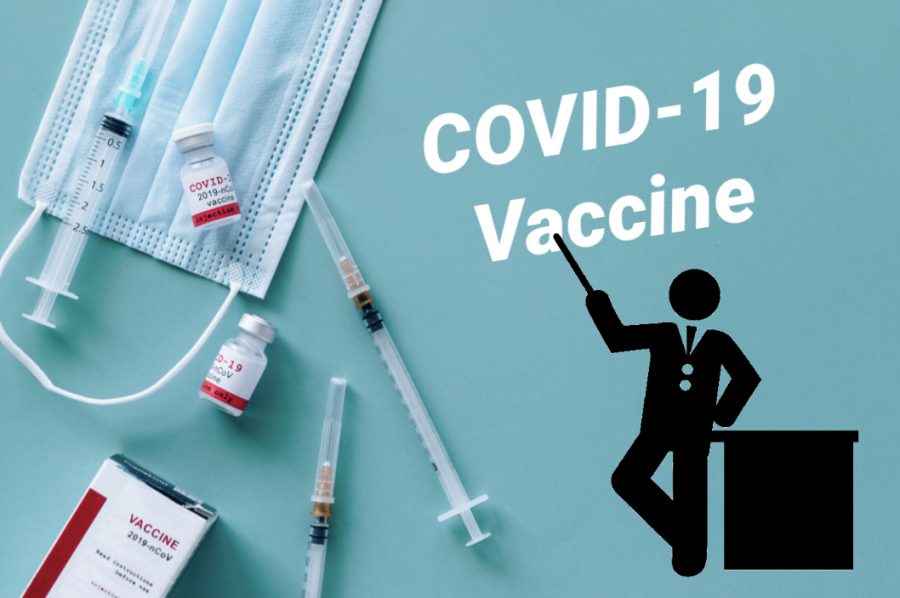 Image courtesy of Nataliya Vaitkevich from Pexels.com and FreePNG.com

Nearly a year after Missoula County Public Schools (MCPS) shut down for the COVID-19 pandemic, teachers can finally see a light at the end of the tunnel.

On March 10-12, many MCPS teachers and staff received their first dose of the Pfizer COVID-19 vaccine. These doses were allotted to the county from a federal allocation of vaccines earmarked for education and child care staff.

In January, shortly after Governor Greg Gianforte took office, he revised the vaccination priority plan. Teachers and other essential workers were moved from Phase 1B to Phase 1C. The revision also expanded Phase 1B to include Montanans as young as 60 or with specific preexisting conditions.

Hellgate teacher Alexandra Startin called that move “a slap.” “I understand that no one person is more significant than any other person. But on the other hand, when you’re an educator, you put a lot of time and money into training for your position and it kind of stinks to think that was felt to be that easily replaceable,” she said. “It’s been really, really nerve-wracking to know that we were taking risks because of coming into contact with so many students.”

However, as part of President Joe Biden’s plans to reopen schools nationwide, states were ordered to prioritize educators. At the time of Biden’s order, Montana was one of 20 states that had not yet made educators eligible for vaccination. The extra doses came from a federal program that delivered vaccine doses to local pharmacies across the state.

Steve Klimkiewicz, another Hellgate teacher, felt relieved. “It was a great feeling to find out that we were able to get that done, and it was good not only just for me, but also for all the other students in that it would hopefully decrease the potential for spread,” he said.

MCPS staff chose to get the COVID-19 vaccine for different reasons, and Hellgate teacher Christine Hiller-Claridge had three main ones. “I decided to get vaccinated because I trust science. That’s one. Two, I feel like it’s my social responsibility to do so, to help bring the curve down, help us get back to what we could classify as normal functioning, as a society, as a country. Three, to decrease potential spreading of the virus for protection of myself, my family, and my students,” she said.

The CDC also recently released updated guidance for what fully vaccinated people – someone who is at least two weeks past their second shot – could do. These recommendations include allowing the gathering of two households, if one household is fully vaccinated and the other is low risk for severe disease.

The ability to soon be able to safely see family in person is a bright spot for many exhausted educators. Startin is excited to be able to see her young grandchildren again. “It feels good to think that I’m at least going to be able to spend time with my family. Again, something other than virtually. I missed a lot,” she said.

“It just all around made me feel so much better in so many ways, knowing all these other people are getting vaccinated and that now it’s just wait out our five weeks.”

Startin, Klimkiewicz and Hiller-Claridge all received their first dose on March 10, the first day of the vaccine clinic run through a partnership between Granite Pharmacy and MCPS. All MCPS educators were able to schedule appointments, with permanent active staff prioritized. It was held in Sentinel’s gym, and according to Startin, was “so slick.”

The process was smooth and fast. “You check in and then they assign you to a table with the nurse who administers the shotgun. They disinfect the arm. And give you a poke,” Hiller-Claridge explained. “It literally took not even three seconds. I didn’t even feel the needle. I was expecting it to like, give a pinch, like a bee sting, like the flu shot does. And I literally said to the nurse, I said, ‘Wow, that was it? Like, did you give it?’”

After waiting 15 minutes to make sure nobody had an adverse reaction, they were free to leave. However, it is normal for some mild side effects to occur later on. Hiller-Claridge acknowledged, “There’s potential for side effects like a fever, headache, chills, but that’s really individually based. That’s not a blanket statement that’s going to happen to everybody that gets it. So, it depends on who you are and how your body responds.”

Klimkiewicz only experienced a sore arm. “It was really sore last night, but other than that, I had no other side effects,” he said. “If you have never been exposed to or had COVID, you’ll most likely get the headache and the body aches and chills and all that kind of stuff on the second shot, because that’s when the booster would kick in.”

He explained that he’s already planning what to do after his second shot, recognizing that if many teachers get their second dose the same week there might be limited subs. “What I will probably do for those days is, understanding that there’s probably going to be a lot of people not feeling great, I will plan my schedule accordingly, meaning probably more class time for students to work on assignments and projects and less time giving instruction from me,” he said. “Unless I’m feeling utterly awful, it would be an easier day for me to come in and kind of have that and not have to put a drain on the resources for people that are having intense side effects.”

There’s a lot of information out there about COVID-19 vaccines, and not all of it is reliable. This is a big concern for many people, and Startin sees it as an issue that educators should address. “We have more access to information than we’ve ever had, but too many people don’t know how to separate good information from bad information. So even though I’m a teacher, I do kind of hold education responsible,” she said.

Hiller-Claridge had advice for anyone who is on the fence about receiving a COVID-19 vaccine. “I mean personally, I believe in vaccinations, I believe in science. I would recommend that they do their research. That they do all the reading that they can about this vaccine. That they understand why and how this vaccine was created so quickly because I think that scares a lot of people, is how quick it was carried out,” she said. “Talk to different doctors, do some reading of the research and the literature from multiple sources, not just one or two sources, but multiple. And then make the judgment call for yourself.”

“If you don’t get the vaccine, then make sure you are socially responsible and take the necessary precautions, continue to wear your mask. I will continue to wear my mask even though I’m vaccinated,” she added.

Teachers are talking to their students about this because they want them to learn and understand. COVID-19 has deeply affected Klimkiewicz’s family as his wife’s aunt passed away from the disease in the fall. He’s been open with his students about his experiences.

“Having had this impact my family very closely, and seeing what it did to my wife’s aunt…  having seen that and gone through that, I would just think I would not wish that upon anyone,” he said. “When you don’t have firsthand interactions with things like this, it’s easy to not think it’s a huge deal, you know? And that’s the reason why I talk to my students about this kind of stuff, because when you actually see firsthand that kind of awfulness that it has on people it’s impactful.”

Receiving the first dose of the COVID-19 vaccine has given him hope that this crisis has reached a turning point. Klimkiewicz is hopeful that as more people get vaccinated, fewer people will have to deal with the horrifying realities of COVID-19.

“If all it takes is getting a shot in the arm to stop that I would happily do it, and I would encourage anyone else to as well,” he said. “I would just encourage anyone and everyone that has the ability and opportunity to get it, to get it as quickly as possible. I get that it’s their choice and they can make that choice. But, you know, the thing we have to remember is our choices have consequences.”