The ‘Defund the Police’ Protests Weren’t Perfect. That Doesn’t Mean They Shouldn’t Have Happened. 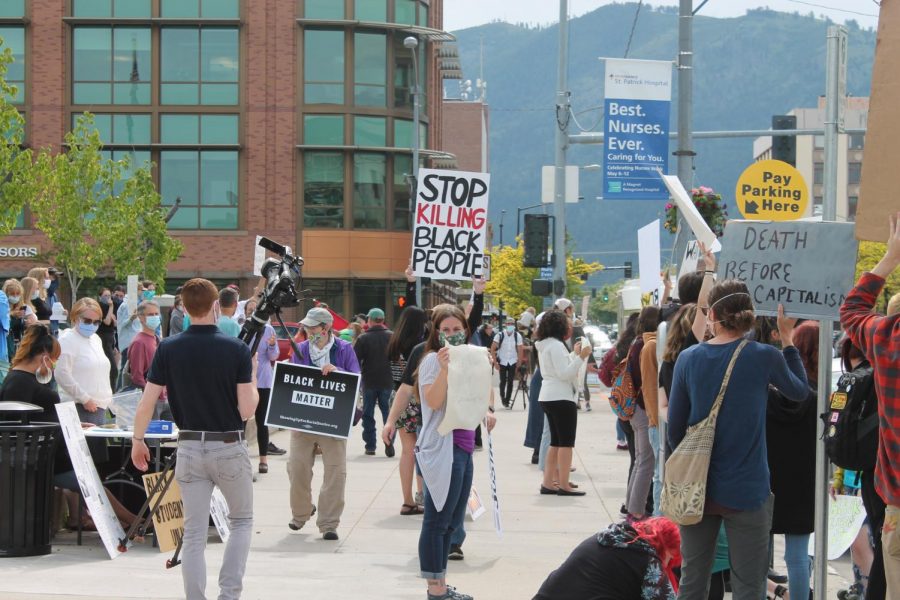 Protesters gather at the Missoula courthouse to protest for racial justice and reform this summer. Photo courtesy of Ali Caudle.

This summer’s protests were not perfect. Messaging and tactics were not uniform. This doesn’t mean they shouldn’t have happened, and trivializing honorable actions by using terms like “snappy slogans” is counterproductive and dismissive. Politicians were not speaking out for police reform and an end to systemic racism, and with continuing police violence sparking outrage, it was only a matter of time before the voters took the issue into their own hands.

It’s important to remember that these protests didn’t have some sort of “public relations” team, like the politicians criticizing them do. People from all different walks of life, across the globe, witnessed the systemic oppression of Black people in their communities for centuries. They were tired of it, and their response was rational. Even if some statements, like ‘Defund the Police’, aggravated some people, most of the other slogans – ‘Black Lives Matter’, ‘Justice for George Floyd’, ‘Say Her Name’ – shouldn’t have.

Additionally, these protests didn’t have a leader or singular point of contact with the media. They were spontaneous, decentralized, and frequently organized over social media. In these conditions, providing a constant, succinct, accommodating message was nearly impossible. While something like “Police Reform Now” may have been less volatile, a different message wouldn’t change the fact that these protests were going to upset people.

Protests like these are intended to break the status quo. This will inherently upset people, as it forces them to challenge their long standing beliefs. This time, it was America’s belief that the policing system was just and fair. That the police were unconditionally obliged to “protect and serve,” and always followed through on that goal. The ‘Defund the Police’ movement was a direct challenge to these opinions, and to an institution long trusted by more privileged Americans.

In the 1960s, the cultural norm being challenged was the belief in white superiority over Black people, or at least the belief in separate equality. Regardless of how a protest occurs, it is bound to cause distress, especially on hot button issues like institutional racism. For example, a Gallup poll from 1963 found that 78% of white Americans would move out of their neighborhoods if Black people moved in. Another found that 60% of white Americans had an unfavorable opinion of Reverend Martin Luther King Jr.’s March on Washington.

The point is, protest is inherently going to cause unrest, because it challenges cultural norms and beliefs. This year’s protests were no different. If the government is not taking action on a problem, the people are obligated to, even if that means adopting a ‘snappy slogan’ and risking alienation.

Going further, while not everyone supported this summer’s protests, the American public’s negative opinion on them has been exaggerated. A July 28 Gallup poll found that 65% of American adults supported the protests. This statistic was 6% lower for white Americans, at 59%. It’s worth noting that a Pew Research Center poll found that in September, American support for the movement had decreased to 55% overall, though this is still a majority.

The argument that the protests this summer shouldn’t have happened because it’s an election year is both inconsiderate and incorrect. It invalidates the understandable anger of people who are tired of oppression, and is especially insulting when it’s being done on behalf of someone like President-elect Joe Biden, who will not end the systemic racism minorities experience. We cannot put the interests of the constantly disappointing Democratic Party ahead of those of people working for racial justice.

If the Democratic Party truly felt that putting an end to systemic racism was an important issue, Biden – author of the 1994 crime bill, in opposition to school bussing, friend of racist politician Strom Thurmond – wouldn’t be the president-elect right now. Additionally, Kamala Harris – prosecutor, self-proclaimed “top cop” of California, supporter of draconian truancy laws and hypocritical marijuana ones – wouldn’t be the vice president-elect. If a party avoids taking a morally correct stance because doing so benefits their political interests, that says something about the party and society at large, not the original position.

In conclusion, this summer’s protests were a good thing. Even if they weren’t perfect, they called for change to a system that doesn’t work in the interests of the common good. Like all protests, they were bound to upset some people. As we can see with King Jr.’s March on Washington, peaceful protests in the past have upset people and later gone on to receive praise as heroic. Who’s to say that this year’s protests are any different? The argument that these protests hurt President-elect Biden’s campaign, and therefore shouldn’t have happened, is both inconsiderate and incorrect.