The Lincoln Project: Anti-Trump Grifting at Its Finest 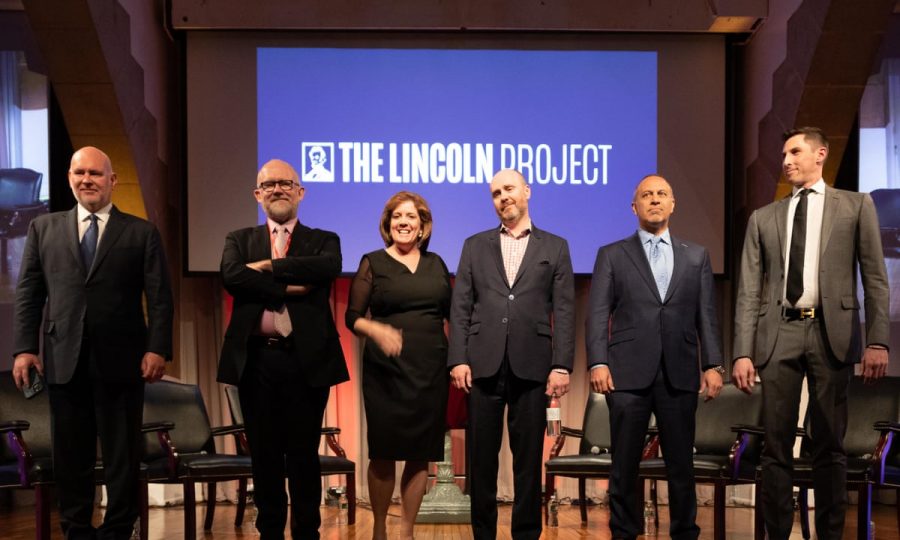 Over the past year or so, a group of NeverTrump Republicans have formed a new, powerful political action committee: the Lincoln Project. The group has gained relevance through its popular Trump-bashing ads that appeal to independents who lean right, yet dislike Trump. Many Democrats stand with the project despite their politically conservative policies, and in doing so  they’re moving the party to the right.

By embracing the moderate wing of the Republican party, the Democrats are inherently embracing their policies to an extent. The Lincoln Project website doesn’t deny their conservative policies, as on their website, the group states their “many policy differences with national Democrats remain.” By collaborating with the Lincoln Project, establishment Democrats are leaning further right, allowing moderate conservative views to bleed into their general rhetoric. They’re also throwing members of the Republican Party an undeserved life vest as they jump from the Titanic-looking Trump presidency.

On top of this, the Lincoln Project’s founders have controversial and ultra-conservative political backgrounds. Let’s break it down. Steve Schmidt and John Weaver are two peas in a pod. This dynamic duo of conservative evil oversaw late politician John McCain’s 2000 and 2008 presidential campaigns, respectively.

This may seem good as McCain was known for his moderate views, but really, he wasn’t all that different from any other Republican congressman. Though he was an outspoken critic of President Trump, McCain didn’t hold up in hindsight, as according to FiveThirtyEight, he voted with President Trump 83% of the time.

Schmidt, on top of running campaigns for McCain, was very important to the George W. Bush presidency. As deputy assistant to Bush, and counselor to Vice President Dick Cheney, Schmidt was a higher up in a harmful and corrupt administration which inflicted mass violence upon people in the Middle East simply to secure oil.

Going further, Schmidt is well known for his suggestion of Sarah Palin as McCain’s running mate in 2008, an incredibly damaging decision which may have lost them the election. Schmidt has also been credited with the nominations of Chief Justice John Roberts and Associate Justice Samuel Alito to the US Supreme Court, both of whom have strong partisan ties.

As mentioned earlier, Weaver has strong ties to McCain, as he was known as one of his closest advisers for a better part of the 2000s. On top of this, he worked on the 2012 presidential campaign of Republican Jon Huntsman Jr.. Though his campaign was short lived, Huntsman was a fake moderate. Unequivocally pro-business, Huntsman Jr. pointed out how his tenure as governor of Utah led to large economic gains and tax breaks for businesses, and that as president, he would do the same for the nation as a whole. Huntsman Jr. also flip-flopped on both cap-and-trade climate legislation and abortion rights, taking a conservative stance on both discussions during his campaign.

Moving on from Schmidt, another creator of the Lincoln Project is George Conway, the husband of Kellyanne Conway, former consultant to President Trump. Although he recently stepped down from his position in the project as his wife did the same in the Trump administration, the Lincoln Project still reflects his political character.

Conway got his start in politics through law, as he represented Paula Jones in her sexual harassment lawsuit against Bill Clinton. Don’t get me wrong, his efforts in this case are valiant, that should be clear. The problem here, though, is that as Jones’ lawyer, Conway often worked with far-right media pundit Ann Coulter and conservative-leaning journalist Matt Drudge. Conway had a continued friendship with Coulter after the fact, even meeting Kellyanne Conway through the Fox News correspondent. From his start in politics, Conway has willingly surrounded himself with conservatives.

Recently, Conway got even worse. After the catastrophic passing of Justice Ruth Bader Ginsburg, Conway came out in support of her replacement, Seventh Circuit Appellate Judge Amy Coney Barrett. He went on, saying that she is “eminently qualified to serve on the Supreme Court” and that there is “no reason to doubt [Barrett’s] fairness or integrity.” The veil is falling – Conway is clearly much less anti-Trump than he claims to be.

The final creator of the Lincoln Project is Rick Wilson. Though not as heavily involved as Schmidt or Conway, Wilson still has a troubled past. After the Lincoln Project aired an anti-Confederate flag ad earlier this year, a series of photos from Wilson and his wife’s Instagram accounts resurfaced. These 2012 photos depicted what many have called “the Confederate cooler,” which had a Confederate flag on the side and a script on the top which reads, “The South will rise again.”

Sure, people can change, especially when it comes to politics. With this much evidence, though, it’s important to make sure not to allow establishment Democrats to affiliate themselves with this group. If they do, they’re only moving the Democratic party to the right and giving more power to people who should have never had it in the first place.

The founders of the Lincoln Project are not in this for the good of the country. They’re in it for their own political goals. By pushing the Democrats even further right, they’re making way for the Republicans to move right as well.

Along with this, the Lincoln Project is keeping the party afloat by showing that not everyone has to go down with President Trump’s metaphorical Titanic. We can’t let them do this. This sounds ruthless, but at times like this, we cannot throw them a life vest. It’s becoming increasingly clear that we cannot defeat Republican ruthlessness with Democratic compassion, only Democratic ruthlessness. When the Democrats are willing to compromise with Republicans and the Republicans are not willing to and don’t need to do the same, we lose all power.

The Lincoln Project is a perfect example of political operatives taking advantage of valid anti-Trump sentiments for personal and political gain. In a word, they’re your everyday grifters. What the Lincoln Project is doing can be done by any number of true Democrat organizations, leading to the same outcome with less pull towards the right.

This group doesn’t deserve our support, and it’s crucial that we don’t give it to them. Democrats can beat Trump without the Lincoln Project, and they’re better off doing so.