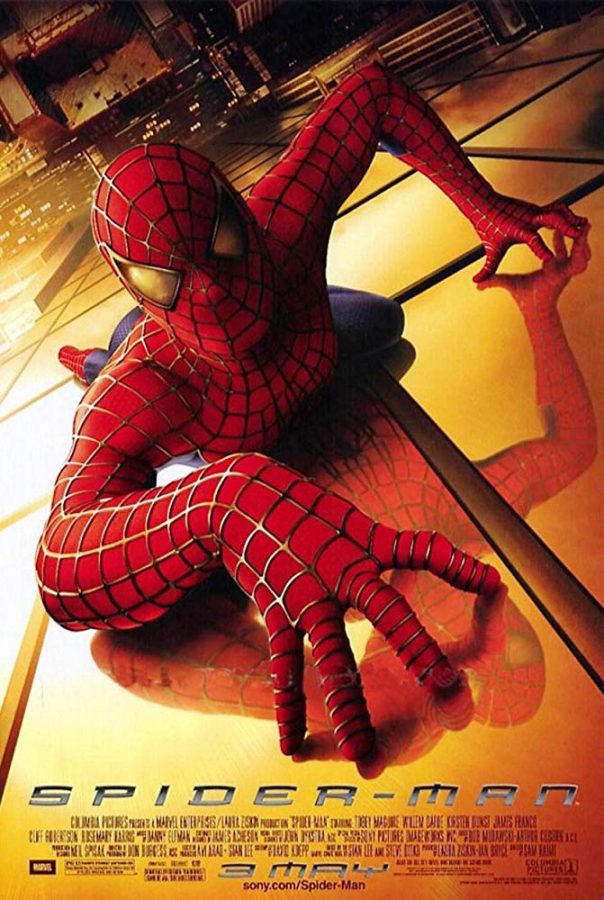 Looking back on this film, it is of no shock to me why the superhero genre of films became so popular.

Spider-Man was released in 2002, and was directed by Sam Raimi. The film stars Tobey Maguire, Kirsten Dunst, James Franco, and Willem Dafoe. After being bit by a radioactive spider, granting him superhuman abilities, Peter Parker swears to fight criminals in an attempt to make his home of New York City safe.

All the performances are great. Maguire is excellent as Parker; he wonderfully balances parts in the film where he’s a computer geek, to being an absolute tool later on. This balance makes it all the more satisfying to see him decide to help others, and the loss of his uncle being his fault gives you a great reason as to why, without seeming forced. He plays well off his co-stars who are also excellent. You can see the progression of character development through all the main cast just by the way they act around each other during different parts of the film, with no exposition required.

The film’s villain, The Green Goblin (Norman Osborn), played by Dafoe is easily one of the best superhero villains found on screen. Dafoe’s performance excels at being a fairly likable guy at first, making you care about him and understand his motivations. This is furthered with the fact that he’s written very well overall.

The script is well paced, never feeling too rushed. It takes time to see both sides of the story, from the villains and heroes perspective that is. For example, early in the film when the script inter-cuts between Parker’s transformations into Spider-Man, and Osborn’s into the Goblin.

The dialogue is written admirably. There are many lines that stand out for various reasons, whether comedic or serious. This can be seen easiest with the character of Spider-Man, as his many quips add not only to his character but the atmosphere of the world built.

Danny Elfman’s score is iconic; working well both during action scenes, and small character moments. For example, Peter and Mary Jane talking in their backyards. The absence of music is used to the film’s advantage, adding to serious moments. For example, during the final fight in an abandoned brick building between Spider-Man and Goblin.

There is one close up shot in the film where Mary Jane is swinging with Spider-Man, and their hair is going in the opposite direction of where they’re going. Not very eye-catching at first, but once you notice it, it becomes very distracting.

The best way I can describe the film’s directing and editing is that they feel incredibly 2000s. The rough match-to-action errors and over use of zooming onto someone’s face are just a few examples. There are points in the film where it cuts from one scene to another, and it’s never quite clear how much time has passed. For example, when it cuts to Peter’s graduation.

Spider-Man is a classic example of how to make a great origin film, as well as a fun, lighthearted superhero flick. Putting this into comparison with some of Marvel Studios’ newest films, they might want to re-watch this, and take notes.