As you know, this was a big week for everyone here at Hellgate with the second annual Spirit Wars in full swing. Gertie the Goat has been one important aspect of it all. The cross town rivalry between the Hellgate Knights and Sentinel Spartans has been around longer than most can remember. This will be the second time the two Missoula schools battle for the Golden Goat.

Not only is this a big week for the school spirit side of Hellgate, but we wouldn’t be here without the teams themselves. “In preparation we focus a lot on our plays, and where the play makers are, and try to get all our nerves out the day before,” senior Kinsey Henthorn said.

“It feels good to be a role model to them and having a leader role but they do teach me a lot still, and with them being really good basketball players it makes a lot of things easier,” Henthorn said regarding her eight sophomore teammates.

Going into the game, nerves are to be expected, but Henthron said that in order to combat them, she hoped to “really just play our game and not drop to their level.”

“I feel like we will all be pretty nervous with everyone there, but I feel like it might help a lot with giving us the confidence and energy,” said Henthorn.

The battle for the Golden Goat is one game that will pull as many people as it can to it, almost equivalent to the amount of people at a college basketball game. With all those people in there, you can barely hear your teammates out on the court, let alone hear your coach screaming their lungs out at you.

During the Spirit Wars, the two teams are judged on positive cheering, who has the bigger/louder crowd, and who had the most of their school’s t-shirt at the game.

The boys coach, Jeff Hays, said, “We prepare just like we do with any other team, they watch film and structure their practices to help prepare for some of the things we are going to see in the Sentinel game.” 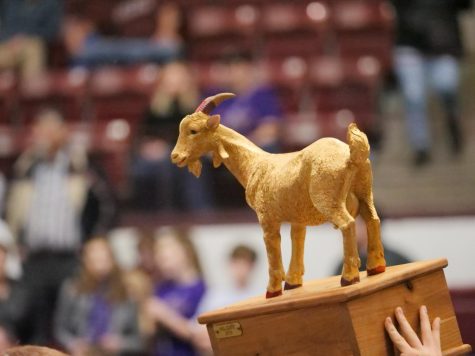 “The strength that most people don’t realize is the chemistry that we have,” Hays said. When playing any sport or doing anything with a group or a team, it is good to have a bond such as a friendship but also to have the same love for what you are doing.

“When you put in as much time as our guys have, it’s almost like a reward playing in a big stadium such as the Adams Center,” said Hays.

Hays believed the team could win, “As long as we stay focused and doing what we are supposed to do and not getting wrapped up in the emotional part of the game.”

If you play or participate in an extracurricular activity, you know at times it gets to your head more than it should. Now try keeping cool and playing a high school game in front of 4,000 people.

In the end, both Hellgate boys and girls won their games. The girls game was a nail biter, and during the boys game, Hellgate was always up. The final score of the girls game was 56-51 in overtime. The boys finished with a score of 73-45.

The battle for the most spirited school was also a close match, as it came down to only 20 points. Hellgate came out on top with a score of 436 spirit points, and the Spartans fell short with a score of 416 points. The excited Knights rushed the floor for the second year in a row!